The World of West Chevrolet


1957 was a big year or the world. The first Frisbee was released, the last episode of I Love Lucy was aired, and people noticed cars were getting more powerful. There was one vehicle in particular which stood out, the Chevrolet Corvette.

While the Corvettes of back then don’t resemble what see on the streets today, they were quite the specimen for their time. Split into two package offerings, option 684 featuring the “Big Brake” package, and the less common 579E Airbox Package,

The Airbox Package featured a special sealed air intake system which drew cooler air from the front of the engine component. This ensured the vehicle was able to reach top performance during its long race runs. Only 43 of the 579E variants were produced, so if you witness one in person consider yourself lucky!

Each generation of the Corvette shows both the vehicle’s progression in performance and technology and Chevy’s capability of always reaching new heights. We’re not sure what the future holds for the Corvette, but we cannot wait for what’s in store! 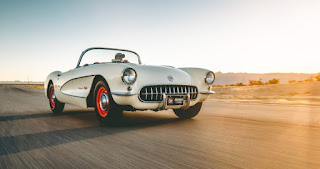